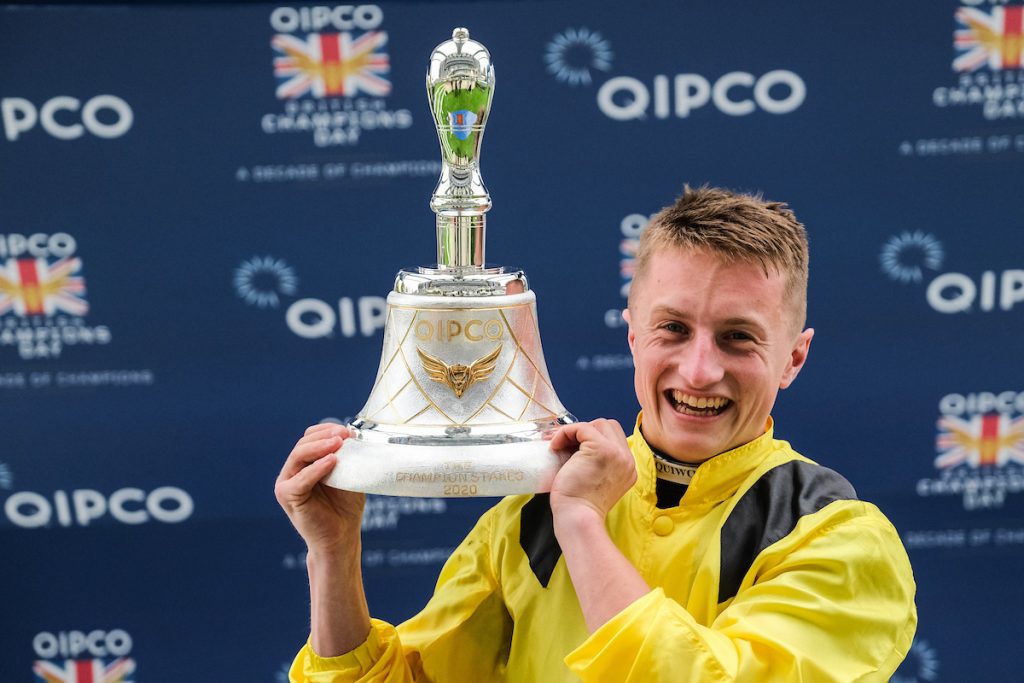 Addeybb (9/1) went one better in the 2020 G1 QIPCO Champion Stakes, putting up an authoritative display to take the 10-furlong showpiece. The six-year-old had finished the three-quarter length runner-up to Magical 12 months ago.

Tom Marquand was the winning rider and is the boyfriend of Hollie Doyle, who rode the first two winners today.

A six-year-old son of Pivotal trained by William Haggas, Addeybb was always in a prominent position and travelled well throughout. Taking a clear advantage quarter of a mile from home, Addeybb was never in trouble thereafter and held off the challenge of Skalleti to win by a comfortable two and a quarter lengths.

Last year’s winner Magical, the 15/8 favourite, did not seem to be going particularly well before making good late progress to take third, a further half a length back.

William Haggas said: “Addeybb is a marvellous horse. He was really up for it today. He is fantastic and I am absolutely thrilled for everyone.

“He didn’t mind [the draw, 11]. He was in a great position and he stays. He is tough, he loves the ground and loves it here.

“He has been absolutely fantastic. Since he won the Wolferton last year and we put the cheek-pieces on, he has just been so consistent. He was really on it today. He looked fantastic beforehand, we thought, but he was grumpy and difficult to saddle, which is a good sign for him. He has such a marvellous nature and this is tailor-made for him. We all know that he loves this ground.

“The filly [Verry Elleegant] that he beat in both his G1 races in Australia won the Caulfield Cup today, beating Anthony Van Dyck, so they were smart performances, but he had never won a G1 in England. He had been second a few times, so that for us is the great joy – we have finally won a championship race with such a good horse

“It has been quite interesting. I said after six-year-old One Master won the Foret for a third time that, if you can keep them happy, sound and not abuse them when they are young, they will reward you when they are older. This is exactly what he has done. Look at today – the QEII winner is five, the sprint winner is six – if they are sound, healthy and keep their enthusiasm, which he has done, then they can enjoy life. I think that was his best ever performance at the age of six.

“He is great at home and Safid, who rides him every day, said this morning that he would win and that he was really on form. I have been not very well for a bit and then have been at the sales when I have been better, so I have hardly seen him. I have seen him at first lot but that is it really, so all credit to my team at home and to Safid in particular, who dotes on this horse. I think he is looking for another couple of months in Australia next spring!

“I have no idea yet [on going back to Australia] because there are horses from Europe in Melbourne and they had 11,000 people at the races in Sydney today. If we can get there, we will obviously consider it. We also might consider Saudi Arabia as well, which is dirt but that dirt track is terrific. I was there last year and I thought it was terrific and possibly worth a short. We shall see and we are going to enjoy this day very much.

“Addeybb is a special horse for us and has done lots of things that we can only dream of.

“The first time he wore cheekpieces in the Wolferton last year he put up a pretty smart performance, and ever since then he’s either been first or second in top company.

“He likes the ground and he goes well fresh. It seems a bit ridiculous taking him to Ayr to run in a Listed race,  but actually it was a nice thing for him – Arc weekend was too close to this at two weeks – and it gave him a month in between. He loves it fresh and we try to keep him fresh, and he was fresh going into Australia.

“We always hoped he had it in him. I personally couldn’t see Magical being beaten, because I thought she beat us comprehensively last year, not by very far, and I was frightened that the ground had dried a bit too much today. But it’s pretty horrible and he loves it when it’s horrible. He is at his best when there’s a ground inspection in the morning and it passes. He is pretty versatile, but he’s deadly on this ground.

“If you watched him all the way round, he was in the perfect position and never looked like being beaten.

“Tom [Marquand]’s a young guy who has a girlfriend kicking him up the backside every day, but he’s a very personable, strong rider with a big future. I have no doubt he will be champion one day. They need to be riding on days like this, and he’s got there very young, but he has a great future ahead of him.”

Tom Marquand said: “Honestly what a credit to Safid [Alam], William and Maureen and the whole team at home. He has gone to Australia, conquered down under and now he’s come back up, he deserved that Group One up here so much because all he’s done is knock on the door, show he’s a champion and he’s never got his real swansong today, but today’s he’s got it.

“He travelled like a true good horse throughout the race and to be honest when I started getting going, I just bombed the straight. It is remarkable, I’ve never ridden a horse like him. He goes over ground that’s as bad as you can get and he makes it feel like you are on quick ground. That is why he’s so good on it.

“It is just incredible. He has shown that he is top-class in Australia, winning two G1s, and Verry Elleegant went and beat our Derby winner from last year Anthony Van Dyck this morning, who Addeybb beat in the Ranvet and QEII. He has come here today and has torn the field apart, beating the likes of Magical. You have to be a champion to do that.

“Genuinely, the draw was the primary and only concern that I had about the race. It can be a pretty tricky start coming down to that sharp bend straight away and to settle into the race is the main concern. Again, in the straight, he is so powerful through the line and just trucks on as if the ground is not an issue, which is phenomenal.”

Referring to girlfriend Hollie Doyle, Marquand said: “I’m so, so proud of her.

“All she does is get up every day and graft, and to ride her first G1 for Archie Watson is brilliant because he’s played such a big part, but also for Alan King because he’s played a big part for both of us in the last few years. Our first Royal Ascot winners were for him and he’s had a cracking year. There is no one, genuinely no one, who deserves it more.”