Magical backed to cast spell on her rivals 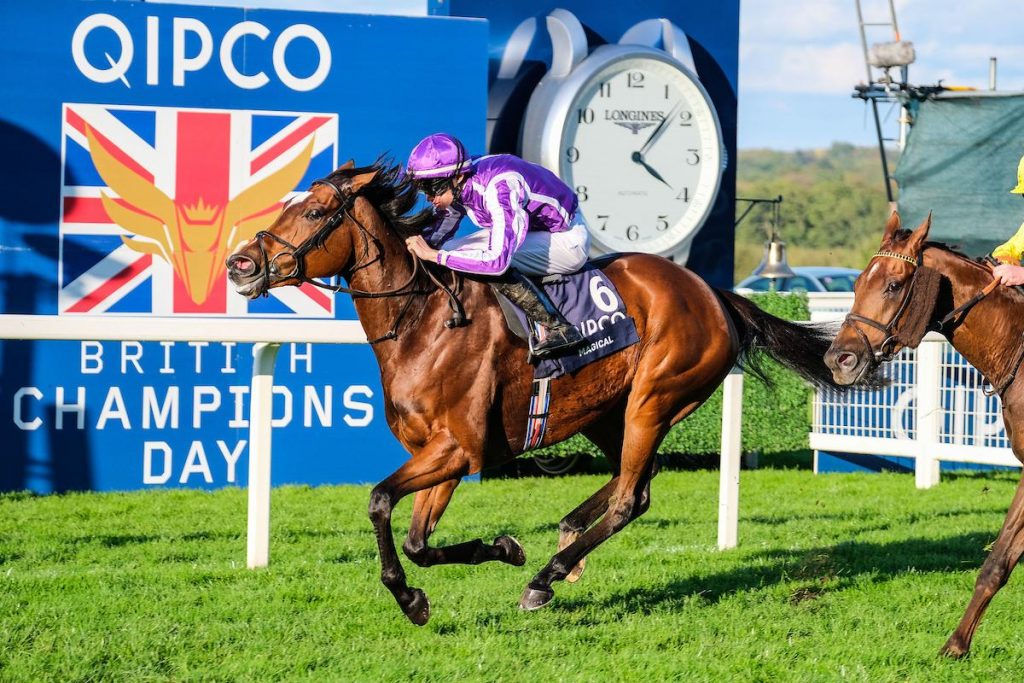 Betfred, official bookmaker of Ascot Racecourse, has reported brisk business this morning ahead of the 10th QIPCO British Champions Day. A fabulous six-race card awaits which features some of Flat racing’s ultimate superstars including Palace Pier, Stradivarius and Magical.

In the opening £300,000 G2 QIPCO Long Distance Cup (1.20pm), the John Gosden-trained Stradivarius is seeking a second win in the two-mile event, but is weak in the betting, drifting from Evens to 11/10 with Betfred. Each-way support has come for Dawn Patrol, successful in G3 company last time out, who is 10/1 from 14/1, whilst Hollie Doyle’s mount Trueshan is 14/1 from 20/1.

Art Power was an impressive winner in handicap company at Royal Ascot in June and is the principal market mover in the £391,260 G1 QIPCO British Champions Sprint (1.55pm) for King Power Racing and Tim Easterby. Fourth in the Sprint Cup at Haydock last time out, he is 13/2 from 10/1 with Betfred, whilst the unbeaten Starman is 15/2 from 9/1 with the bookmaker for Ed Walker in the six-furlong event.

The John Gosden-trained Mehdaayih has only run once this season, trailing home sixth in the G1 Prince Of Wales’s Stakes at the Royal Meeting. However, the four-year-old has attracted plenty of support this morning, contracting into 13/2 from 10/1 with Betfred for the 12-furlong £350,000 G1 QIPCO British Champions Fillies & Mares Stakes (2.30pm)

Another Gosden-trained inmate who is the subject of punters attention is Nazeef in the £650,000 G1 Queen Elizabeth II Stakes (Sponsored by QIPCO, 3.05pm). Successful in the G2 Duke Of Cambridge Stakes at Royal Ascot, the four-year-old daughter of Invincible Spirit is also a dual G1 heroine this season and is 10/1 from 11/1 with Betfred.

Superstar mare Magical is chasing an eighth victory at G1 level following a smart success in the G1 Irish Champion Stakes at Leopardstown on her latest start. The five-year-old is the solid 6/4 favourite from 9/4 to retain her crown in the feature race of the day, the £750,000 G1 QIPCO Champion Stakes (3.40pm) over 10 furlongs.

Betfred Spokesman Matt Hulmes said: “What a Champions Day we have in store. It is the reigning Champion Stakes heroine Magical who has caught the attention of the punters, backed down to 6/4 and we could see her going off closer to the Evens she returned twelve months ago. Meanwhile, Prince Eiji has been the subject of good support in the concluding Balmoral Handicap, shortening to 16/1 from 28/1.”