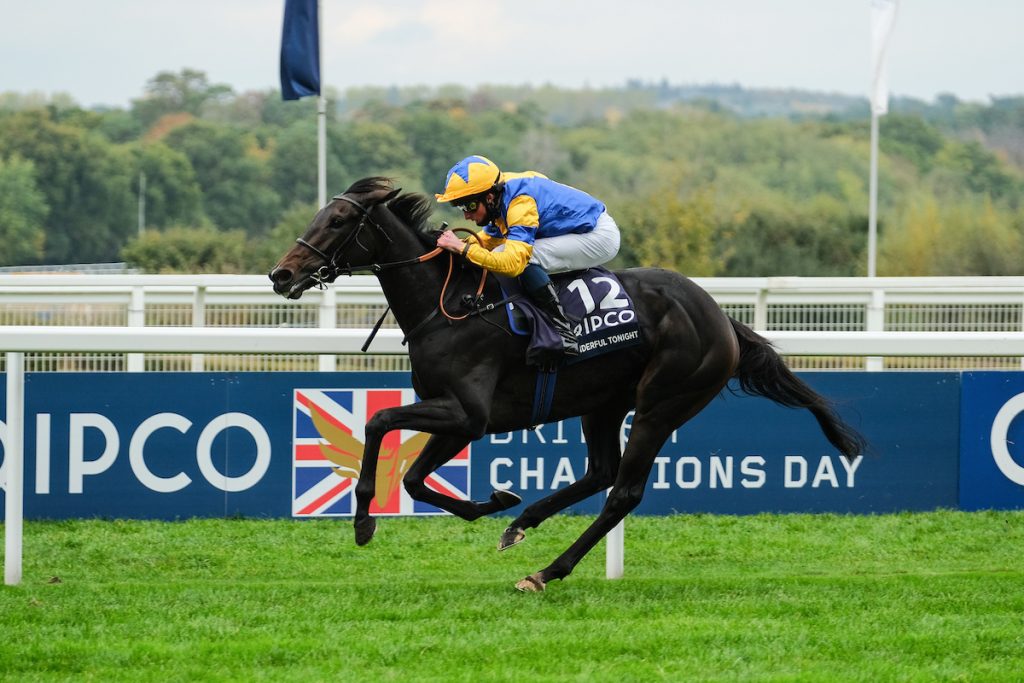 The three-year-old Le Havre filly, carrying the famous colours of Chris Wright, was always travelling well under William Buick and hit the front three furlongs out. She was never in any serious danger thereafter, coming home two and a half lengths clear of Dame Malliot, who was partnered by Hollie Doyle.

David Menuisier said: “Look I am speechless, absolutely speechless. I am so tired, I think I pushed harder than William riding the filly!

“I am absolutely thrilled. She is a champion. I feel so lucky and blessed. We bought her at the sales as a yearling for next to nothing and here she is winning her second G1 in two weeks.

“We know that she is very good. The only question mark was whether she had recuperated from the Arc weekend or not. I hadn’t, but I am glad she did!

“She is top-class all round. She is easy to train and as tough as anything that is tough. She is getting better and better, and there is still some improvement to come. She is still a tad keen early on so, once she really knows how to settle, I think she can go up a notch again.

“You never know, especially with fillies, whether they are going to train on or not, but we wanted to keep her as a four-year-old to target the Arc next year. We nearly ran her in the Arc this year – I think she would have run a stormer – but she wasn’t a G1 winner yet. Now she is, so the sky is the limit.”

William Buick added: “This filly, she is rock solid. David was very confident beforehand, she is just very straightforward. She is proven on the ground and she stays well, so she ticks a lot of boxes and to be honest with you I have been looking forward to riding this filly all week.

“She was out on her own all the way up the straight, it’s a long, daunting straight no matter what you’re riding [but she was fantastic].

“Her form is there for everyone to see. She won the Royallieu at Longchamp on Arc weekend, which is a mile and six, so we knew she stays, and the ground was very similar to today. She ticked all the boxes, but she has a lot of class and the will to win to go with it.

“The race panned out beautifully for her but, when you are in front from about three furlongs out, everyone knows that it is a long way home. That straight can be quite daunting, but she did nothing but keep going. She has the stamina to go with it as well.

“She did everything that I would have liked her to do. The race panned out lovely – she got a nice bit of cover for the first half of the race and I always felt that she was in a good rhythm. It panned out as one would have hoped.

“She has beaten some really good fillies very well. When conditions are there to suit her, I can’t see why she shouldn’t scale further heights. She is very effective on soft ground and maybe other horses aren’t as effective as her, but she is by Le Havre, so she might be bred to go on that ground.

“I have been riding for David Menuisier quite regularly all year, and his horses have been going well all year, and whatever grade his horses run in they always turn out beautifully. I have been very fortunate to get a few winners from David this year and to get on this filly was special. She was a filly who I was looking forward to riding all week.”

Asked about Hollie Doyle’s achievement in riding her first G1 here on QIPCO British Champions Day, Buick said: “She is a good girl and a tough rider. It is Champions Day, one of the biggest days of the season, and fair play to her.”